Getting older, looking back, still the fact is nothing changed at all 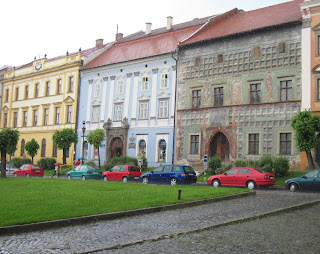 I visited Levoca in Slovakia 21 years ago, with a very young Matthew and Mark and loved the faded grandeur of the town square.  On that visit we arrived by bus from the Tatras and met a waitress in a cafe who spoke English and was vegetarian and helped us find a suitable lunch.  Renovating Levoca after the years of neglect since the 17th Century was going to be a long process but I knew I would be back to see the progress.

This time we got to the town by walking along the valley from the campsite 2km away.  The campsite is terraced on a steep grassy hillside and as readers may have heard there has been heavy rainfall in central Europe that has caused floods along the Danube and so the field was muddy in places.  In adversity, campers help each other and on our last site in Hungary, we became comrades with couples from the Netherlands and France, as we sought pitches that were solid enough for a van on the otherwise empty camp site.

In Levoca, there were already two caravans from the Netherlands and a German camper in a VW and they all wanted to help us find the best pitch.  Together, we identified a suitable route through the site to a pleasant pitch only to find our 35m of electric cable would not reach a vacant connection.  After a considerable amount of discussion in various languages, I was dispatched to ask the Slovakian camp site owner, who spoke a little German, if he had a longer cable, although I didn’t know the word for cable in either Slovakian or German.

The beautifully decorated Renaissance houses in the square of Levoca are now mostly restored to their former glory, although there is still scaffolding on one of the churches in the centre and improvements to the road surface being made.  The town walls are still splendid, the cage of shame for local wrong doers is still there and there are more cafes than there were in 1992.
Posted by CandA Kubicki at 21:03