Your candle burned out long before your legend ever did 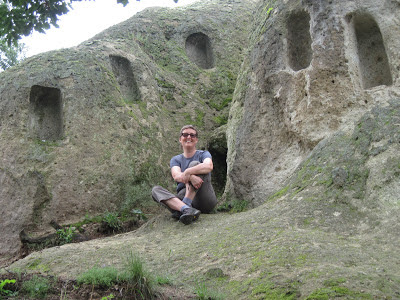 A couple of days after our eventful walk in the Matra hills, we set off again for a walk, a little east of the Matra, in the Bukk hills of Hungary, this time to see a sight known as the Beehive Stones.  These stones are chunks of tufa rock; this is easy rock to work and in many countries is associated with ancient sites, for example the Etruscan routes we saw in Sarnano last year.  In Hungary there are over 100 Beehive stones, most of which are in the Bukk hills; they have gained their name because some archaeologists think the niches carved in to the rocks were used for ancient beekeeping but other people have different hypotheses.

We parked in the small, lively village of Szomolya, strung out along one main street, as seemed to be so common in Hungary; elderly women in headscarves were buying bread, parents were waiting by the school gates for their children, around eight men were putting up a covered stage in front of the church for the weekend village festival and gardens were being tended.  The walk up to the stones was well signed from the war memorial and we set off up hill, passing wine cellars, also cut out of the local rock and vineyards until we were above the woodland and then dropped down to the hillside where there is a collection of at least half a dozen large stones, all with at least one oblong niche carved on the side.

Some visitors clearly supported the proposition that the niches were for ceremonial use and had left tea lights on the shelves, obviously to the God of Ikea.  We didn’t come up with our own theory for their original use but we did find it difficult to make sense of how they would have been used for beehives.