She might be in Tangier, she left here last early Spring is living there I hear 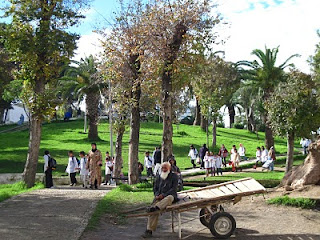 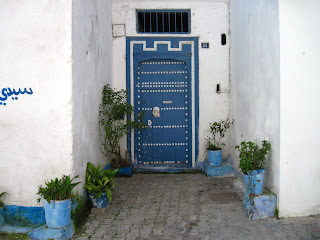 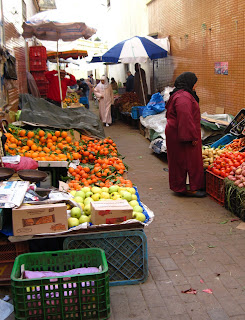 Since Dylan sang about Tangier in the '70s, its been on the list of places to visit. However, our only other connection with Morocco is through the Western Sahara Campaign; every month for a number of years they sent us a list of four addresses and we diligently wrote to each one asking for the same three men to be freed from prison. The crime of these men was to seek self-determination for Western Sahara. We considered not going in solidarity with this campaign, but felt this small boycott would have little impact.
We opted for the guided tour with our ferry tickets; largely because this option was strangely cheaper than just the return ferry and included a guide, a bus tour of newer Tangier and lunch. We are not generally tour group sort of people, but at this time of year our group was our excellent guide, who answered all our questions about this very foreign country, us and an American father and son, who proved to be very good company.
We have been travelling through Moorish occupied Spain for some weeks and so the architecture of the narrow streets of the old town of Tangier were in many ways familiar. That said, this evidently was not Europe, the Straits of Gibraltar may seem narrow, but they separate two different worlds and all our senses were overwhelmed by new sights, sounds and smells; the call to prayer from the mosques, women washing clothes in the streets, the wood-fired bakery, the constant requests to buy souvenirs, ornate remnants of Colonial Morocco, young men hanging on to the back of lorries hoping to get a lift to Spain, children chanting as they played in the school yard and the beautifully tiled doorways leading in to the huge prayer spaces in the mosques.
The disadvantage of being on a guided tour is that you are taken from spending opportunity to spending opportunity; the out-of-place camels who had been bought north for the tourists, the three storey carpet shop, where the pressure was off us once the Americans had agreed to buy and the sweet smelling spices shop with a multi-lingual shop-keeper who went through the origins and uses of different spices and oils.
Posted by CandA Kubicki at 16:44