People say we monkey around 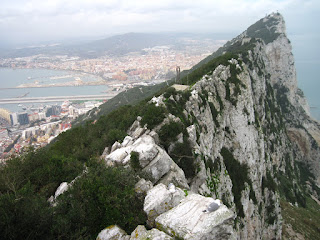 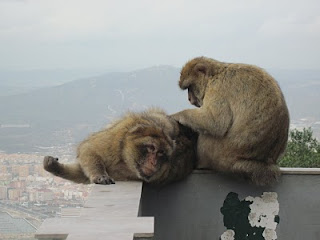 We don't quite know what to make of Gibraltar, but it diverted us for a few hours. We have caught glimpses of the bulk of the rock over the past week and were intrigued to see what lay around it. Walking down Gibraltar's Main Street felt like being in a UK high street; with M&S, BHS and Next, familiar fake victorian street furniture, red Royal Mail postboxes and pounds and pence. We treated ourselves to chips and curry sauce and bought M&S teabags.
We took the cable car up to the top of the rock to see the Barbary Macaques that live here; no one is sure if they were introduced or are a remnant of the African population. However, unlike the Macaques in Morocco and Algeria, where habitat loss has reduced populations, the Macaques in Gibraltar are thriving, with 230 living in six groups. As a tourist it is illegal to feed the Macaques, they eat leaves, olives and roots and are given supplementary food and veterinary care by The Gibraltar Ornithology and Natural History Society, who also monitor and control the population with contraceptives, as they have no natural predators on the rock. There is controversy surrounding the Macaques; some disruptive individuals have been culled in recent years, much more severe than a ASBO.
We have moved on to Tarifa; leaving the calm Mediterranean behind, we are now facing the Atlantic breezes and surfer dudes. The campsite here claims to be the most southerly site in Europe and it is certainly our most southerly point on this trip.
On the way here we drove past the wind farms of Tarifa. The chip shop owner in Gibraltar said that all Tarifa's power comes from wind. We've not managed to confirm this on the world-wide-web, but there are claims that Europe's largest windfarm is above Tarifa and that it produces enough power for a small town, like Tarifa, so in theory it is perhaps true.
Posted by CandA Kubicki at 16:44