Oh, Father of the four winds fill my sails 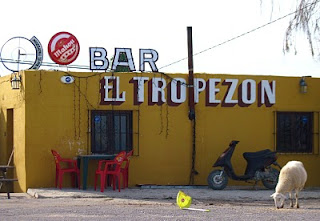 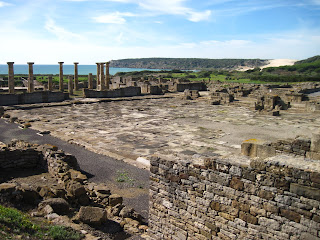 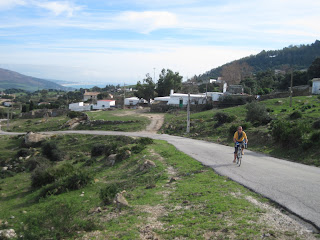 Tarifa’s geographical position has shaped the development and the atmosphere of the town and its surroundings; it is on the south west corner of Spain, the Straits of Gibraltar to the left, the Atlantic to the right. The winds off the Atlantic are welcome relief in the summer, when all four of Tarifa’s campsites will be full, but keep most of the long-term winter campers away; this breezy weather is ideal for kite and wind surfing, even in January people in wetsuits are messing about on the beaches. The contrast between Tarifa and the Mediterranean resorts and campsites is huge; the shops in Tarifa sell Rip Curl clothing and ethnic jewellery; our campsite is green, tranquil and un-crowded, there are a few retirees over-wintering from different countries, there are also young people with battered vans and surf boards on the roof; this mixed community suits us well.

The beach is just outside the campsite and is a vast expanse of sand, stretching the kilometre of so south to Tarifa and as far as the eye can see to the north. It is bordered by green fields of brown cows, sand dunes and woods of Umbrella Pines. This coastline is now protected as the Parque Natural del Estrecho (the Straits) and further development is unlikely with this designation.

There is no shortage of activities to keep us occupied in the area. We have cycled north to Bolonia, to see the Roman town that has been excavated there; we have wandered around the pretty streets of Tarifa and we have paddled in the Atlantic Ocean and watched amazed as a group of White Storks follow a chaotic flight pattern.
Posted by CandA Kubicki at 15:34