Walking on the beaches 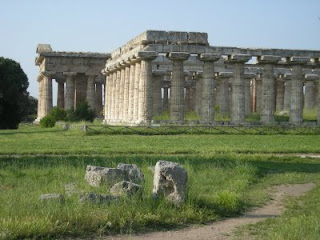 The Italian coastline is well developed, with little space between the sprawl of the seaside towns.  Despite the temperatures of over 25 C, we have arrived in Calabria early for the season and on the beaches the different Lido are slowly being built for the summer; each with a wooden hut for a bar, a covered area for shade, a fenced in beach for the sunbeds and a different name: Lido Rosso, Lido Acapulco etc.  The campsites along this coast are numerous and large, but with only a handful of campers have a desolate air about them:  Most pitches have old neglected caravans waiting to be spruced up for the summer and therefore give the sites an appearance of a caravan breakers yard.