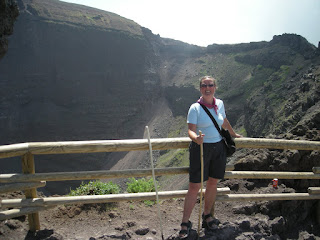 There is plenty in Italy to remind you that the earth is not as stable as we might like to think: We drove within 20 kms of L’Aquila, where people are still living in tents after the recent earthquake; the campsite near Napoli is in the crater of an extinct volcano where hot sulphur gases still burst out of the earths surface; we climbed Mount Vesuvius, stood over the huge crater and followed the lava flows from 1944 down the mountain and we marvelled at the streets and houses of Herculeum, which disappeared under many metres of mud during the ‘79 eruption.