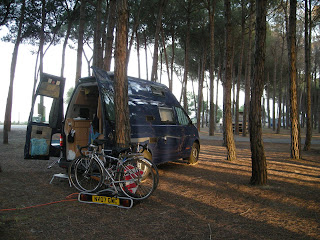 In the five weeks we have been away we have had a number of items break already.  This seems worringly early for our equipment to fail, but we have managed to locate Italian shops to replace our outdoor chairs (this serves us right for bringing ones that only cost £5!), the mains lead for the MP3 player speakers and the lead between these and the MP3 and a new T Shirt for Anthony, after one shrunk in a drier it shouldn’t have been in and we have bought screws to mend the outside table.  However, we reassured ourselves that not everything in life is as reliable as a VolksWagen, until this week when a new light appeared on the dashboard.  Consultation with the handbook revealed this was something to do with the exhaust and we should visit a VW garage.  We managed to locate a garage and to communicate the problem and we now have to wait until Thursday for the part to arrive.