She said the man in the gabardine suit was a spy 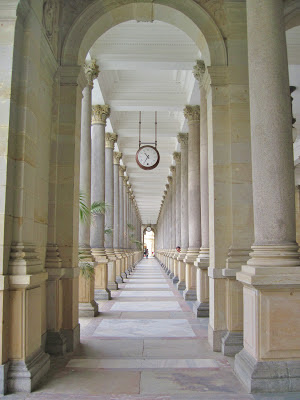 Spa towns in continental Europe always have an atmosphere of indulgence and repose and none more so than Karlovy Vary in Bohemia in the Czech Republic.  Previously a German speaking town and called Carlsbad under the Austro-Hungarian rule, this small town packed so many fanciful and elaborate buildings in to one town, it took our breath away.

Walking through the spa, you pass 13 water fountains, each with a plaque giving the temperature of the ever flowing water, usually 50-600C.  At the souvenir stalls you can buy small pottery cups to fill, allowing you to take the waters from each of the mineral rich springs.  After drinking 13 cups of this warm, only slightly sulphurous water, the rich Germans and Russians can pay for massage, colonic irrigation, permanent makeup or any number of other therapies and treatments.  The new rejuvenated you can then buy some overpriced designer clothing and eat expensive salad in a fancy restaurant.


For the tourists, this is all lots of fun and provides ample opportunities for people watching; that man in the dark suit and mobile phone looks straight out of a Russian thriller, the woman sitting reading an ebook in the steamy room with the geyser looks like she has come to Karlovy Vary to forget an unhappy love affair and which country were the couple in the matching shell suits from?

The appropriately named Mini Camping in Karlovy Vary is a small and perfectly formed camp site, the like of which you rarely find.  We had a pitch next to the fish pond and were fittingly lulled to sleep by the sound of the adjacent fountain.
Posted by CandA Kubicki at 21:02