He looks through his window, what does he see? 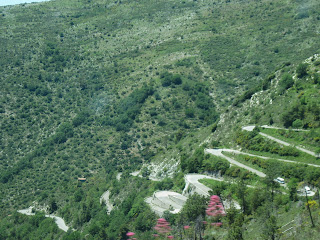 We have driven many kilometres over the last three weeks; of course, in the Blue Bus, ‘it’s not the destination, it’s the glory of the ride.’  Driving has given us an opportunity to consider the differences between the roads in the different countries we have travelled in and it seems to us that Italian hairpin bends are easier to swing around in a long wheel-base van, than French ones; we don’t know if it is physics, maths or engineering, but certainly the Italian’s have learnt a thing or two about building mountain roads and they are generally wonderful routes to follow.  We are also interested to see that despite the apparent European-wide recession, in Italy they continue to have a road building and road improvement programme.  As much as possible we used the main roads, rather than the Auto Strada, and we noticed new by-passes still being built around a number of small towns, keeping the road building industry in work, something not a current activity in England. 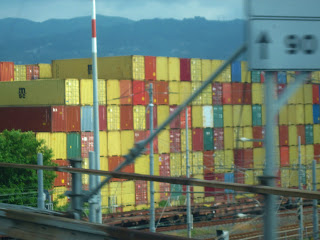 We have been taking photographs from the passenger seat of the Blue Bus as we move from campsite to campsite, this creates some odd looking photographs, but some of them are interesting, showing the differences in landscape we have passed through.  We are not only interested in the tourist itinerary, the local industry and agriculture is also absorbing.  Travelling north from Entrevaux to Gap in France we came through an area of intensive fruit growing, further north the farmed landscape changed to a  more pastoral one and we once again saw sheep and cows in the fields and farms selling home-made cheeses. 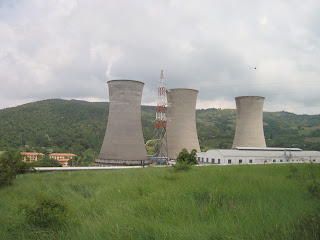 The scale of the marble quarrying and shipping was fascinating as we drove along the Italian coast around Massa.  Another area that attracted our curiosity was on the road between Orbetello and Volterra in Tuscany, where the geothermal energy is utilised to run power stations; for a few kilometres the smell of sulphur fills the air, pipelines roam up and down the hilly Tuscan landscape and large cooling towers dominate the landscape, until you are once again in the typical Tuscan scenery of vines and cedar trees.