Your custard pie, I declare, it's sweet and nice 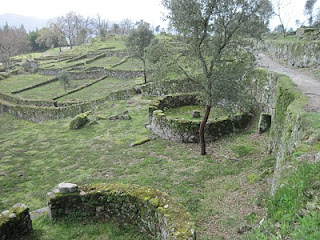 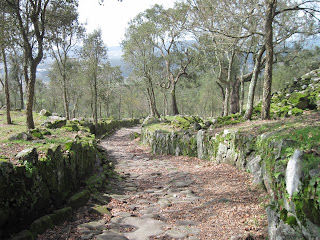 We feel a little gloomy to be leaving Portugal; we have enjoyed our six weeks exploring this country on the edge of Europe. We bought our last Pastel de Nata, the extremely tasty Portuguese custard tarts, got lost in the last Portuguese town devoid of signs and stayed at our last cheap Portuguese campsite.

At home it is fairly easy to be vegan-ish, but travelling in Europe we have indulged in dairy products on a number of occasions. Our blog readers may have noticed; (and comments have been made) we are food-obsessed vegetarians and so we often feel we miss out on getting a real taste for a country; in Portugal we have missed out on the delights of Salt Cod and the many smoked meats, so to also not get a chance to at least try the many different cheeses and the fantastic Portuguese cakes, including Pastel de Nata, is more than we can manage. We will revert to our old regime when we return.

Our last sight-seeing trip in Portugal was to Citania de Briteiros, south of Braga; a Celtic hill town settled between 1,000 BC and 1,000 AD. This sizeable archaeological site is an early prototype of the walled hill town and walking around its cobbled streets you get a clear sense of how the place was lived in. As well as many houses and a series of enclosing walls, Citania de Briteiros has a pre-Roman bath house and a large building which experts think is where the men of the village gathered to chat and make decisions; just as we see them gathered today putting the world to rights in the village cafes.
Posted by CandA Kubicki at 19:28