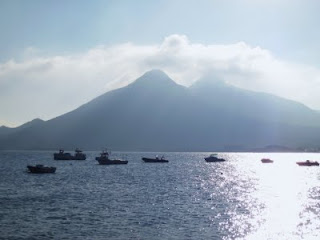 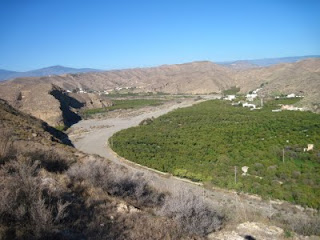 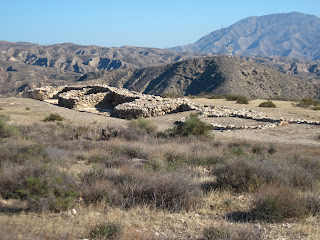 We like Decathlon shops and wonder why this type of large sports store is not more popular in the UK: under one roof you can buy all the gear you need for all manner of different sports; you go in for a new inner tube and come out with a kayak. We went in search of our nearest Decathlon for bike parts, having realised that the repair carried out by the bike shop would not do. We had used a bike shop to avoid having to buy the tools and then find room for them in the van; we left Decathlon another 100 Euro poorer, but with all the parts and tools we needed and Anthony returned Carol's bike to mint condition. We had an afternoon spin on the bikes to try out the new wheel and cassette; the hills of Cabo de Gata ensuring Carol used all 24 of the gears she once again had at her disposal. We stopped at a small village to enjoy the sunshine, as the photograph shows.

We have wondered if the Spanish have an equivalent of Munro bagging or Wainwright collecting. To us it is strange that footpaths often do not go up to the top of hills, they may contour around the top or pass over the ridge. The hill across the bay in the photo is the highest point in the Cabo de Gata Natural Park and there are no footpaths up it at all.

On the way to Roquetas de Mar, our next stop, we visited Los Millares; a site of a large and thriving village 5,000 years ago. Archaeologists have uncovered a walled village, houses and at least 80 burial cairns, which are dotted over the landscape. The photograph shows part of the village and the view from there over the now dry river; 5,000 years ago the river would have been flowing all year and the landscape would have been woods, rather than scrub.

If this landscape looks at all familiar, it is because many Spaghetti Westerns were filmed in this area. We intend to sit down and watch 'The Good, the bad and the ugly' this weekend; all together now, de de de de dum, ooh aah ...
Posted by CandA Kubicki at 17:46