Things that the everyday folks leave behind 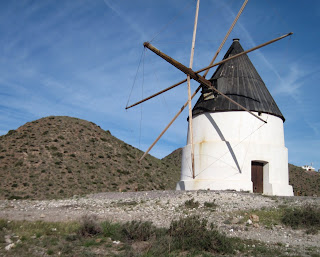 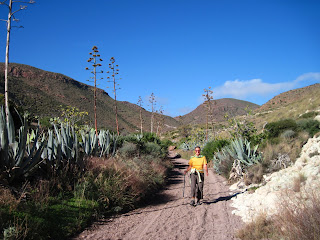 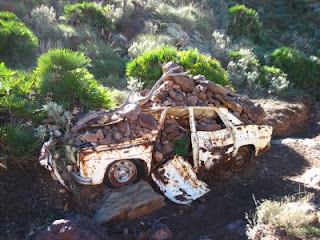 We were not sure if Andy Goldsworthy had got here before us and is branching out into metal work as well as stone, or if this is an elaborate Spanish way to stop litter blowing away; the car filled with stones was an interesting find by the footpath into the caldera of an extinct volcano in the Cabo de Gata Natural Park near Almeria.
The walk to the caldera was beautiful, through cultivated Agave, Prickly Pear and occasional olive trees, with thyme smelling sweetly under our feet. The Agave with their tall flower stalks might look like cactus, but they are closer relatives to lilies and are grown for making ropes, for the sweet syrup and the flower stalks also make a didgeridoo when dried out.
We considered walking up to the ridge around the caldera, although there was no footpath marked on the map (yes, we had a map). However, it was the weekend and first we heard gunshots and then Anthony spotted two figures with shotguns on the ridge, so we decided to stay lower down and tried to be as conspicuous as we possibly could.
Spanish road sides are littered with plastic bottles, cans and other packaging that has been slung from passing cars. An attractive stretch of coastline can on closer inspection be covered in shards of broken glass; we presume the remnants of summer evenings watching the sunset and drinking beer. Whilst not in the same league as southern Italy, there certainly is a disregard for tidiness, even in attractive and protected landscapes. The other ubiquitous roadside sight are the sex workers; dressed for the disco, these women have anything but glamorous lives, spending eight hours each day sat on a plastic chair by a main road in an effort to earn a living. Brothels are tolerated in Spain and it surprises us that roadside sex workers continue to exist.
Posted by CandA Kubicki at 19:09