He takes a whisky drink, he takes a lager drink 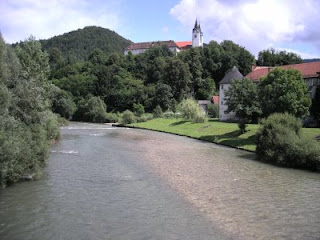 We have moved to the Savinja valley, in the north of to be back among the mountains. This is another very pretty area, with lots of hop growing for the brewing industry. However, produces more wine than beer and the campsite organised a wine tasting evening to allow campers to taste a selection, as Slovenians drink all the wine they make rather than export it.

Not surprisingly, it turned out to be an entertaining evening, with the mostly Dutch audience entering in to the spirit of the evening with enthusiasm. Uri, the campsite owner was the host for the event: He told us, ‘My Dad was a communist, I am a capitalist’, as we handed over our ten euros.

He provided some background geography to the wines; ‘ is the shape of a chicken, and it is so small a chicken can walk across it in one day.’ His English was excellent, as was that of most of the Dutch, although he over-used the word ‘situation’. He entertained us with stories about the different wines: We drank fine wine Slovenian’s could only buy after 1980, as before then Tito drank it all and cheap wine favoured by the lumberjacks as they took huge rafts of logs down the rivers to the Black Sea; perfectly described as a ‘vinegar situation.’ We drank wine high in tannins, which he claimed was, ‘a really healthy situation’ and he was scathing about some of the wine spotted in the campsite bottle bank; ‘an Aldi situation’.

The evening became less structured and more out of control as Uri sampled the wines with us. We learnt that young people in like to drink wine mixed with cola, to get them drunk and keep them alert at the same time. We also learnt that the screw top wine bottle is ‘legal, recommendable and fun!’ The wine was accompanied by bread and bowls of Slovenian Olive and Pumpkin oil to dip it in and cheese, as well as glasses of water and an accordion player and a group of five men who sang traditional songs beautifully.