Life is a Minestrone 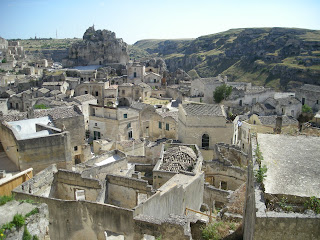 Matera is famous for the Sassi, cave-like houses excavated from the limestone. The town is set on one side of a limestone gorge and steps allow you to wander up and down between the houses, now mostly empty following slum clearance in the 1950s and 60s.

At Matera we camped on a basic site, with a restaurant attached. We chose to celebrate the fantastic service from the VW garage in Corigliano, who not only fixed the exhaust problem on the van, but also informed us it was still under warranty and we treated ourselves to a meal out; courtesy of Anthony’s ex-colleagues at Uclan, who had been very generous with their gift of enough Euros for lots of treats when he left.

The waiter spoke broken English and was keen to talk to us about the food, even after we had explained we were vegetarian. He told us that in Italy they have many courses and described so many different dishes, we became hazy about what we were being offered and with no menu or price list to guide us we just kept nodding. The bread and olives we grazed on while the chef got to work were followed by bruchetta with tomatoes, next steamed greens in a good béchamel sauce. The first pasta dish was ear-shaped pasta with rocket and olive oil; the second came with spirals, mushrooms and too much salt: Were they intending to work through all the many different pasta shapes Italian shops stock? The waiter came over to describe the next course; while Anthony was on an eat-it challenge and had a bring-it-on attitude, Carol said, no more and we were allowed to proceed to dessert, all three of them! Coffee to finish made this a seven course meal, with a bottle of good red the bill came to 30 Euros for the two of us.

Parking in Italy is usually difficult and generally on the street, rather than a car park and Matera was no exception. When we returned to the van we were annoyed to see that a vehicle had hit the van, leaving a small dent and ripped a plastic vent cover off the side door. Anthony has fashioned a temporary repair using the tent repair kit.
Posted by CandA Kubicki at 16:24