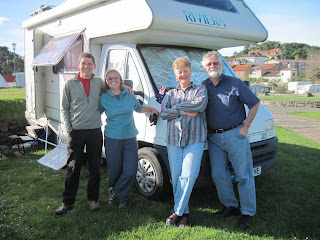 Novels
It was not possible for us to take enough books to read during a whole year. However, this was not a problem, as we were often able to swop books with other travellers and this was an excellent opening line with new friends. Some campsites in Spain in particular, have books in English you can take away. We swopped books and DVDs with Mike and Theresa each time we met up with them - this is the excuse for putting their photograph here.

We have tried to read some books that provide some background to the countries we have travelled in. Below is a list of some of the ones we found most informative.

In addition, we have Rough Guides or Lonely Planet guides to each country we have travelled in, depending on what has been available in the charity shop or shops when we arrive in the country, we don't really have a preference.
Walking and cycling guides
In Austria and Italy (usually) it was possible to buy local walking maps, which is our preferred way to plan days out walking. However, in Spain and Portugal we have not been able to find suitable scale maps and would advice others to buy maps from Stanfords, via their excellent on-line shop, before setting off.
The following guides have been useful:
Languages
For the countries we were sure we were visiting we took a dictionary and phrase book. Otherwise, the Berlitz European Phrase book is a permanent part of the kit in our van; ours covers 12 languages and means we will never find ourselves in the Netherlands not even knowing how to say thank you again.
Posted by CandA Kubicki at 10:53