Take the world in a love embrace 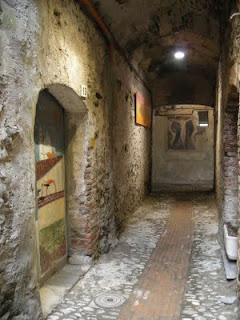 Help with other suitable lyrics for our post titles would be appreciated: There are no prizes for guessing the song we're humming along to at the moment.
Despite being reassured that the Col de L'Arche was always open at the end of April, half way up we passed a sign informing us it was definitely closed for vehicles without snow chains, so we re-routed through the Verdun towards Nice and the coast, where there is little danger of late snow fall. The sunshine, tunnels and fast driving made us feel we had joined the Monaco Grand Prix, as we crossed the border into Italy.
To confuse our language skills even more, our first stop in Italy was on a Dutch owned campsite near to Albenga on the Ligurian coast. Albenga is a pleasant town, with a large market and a fantastic medieval town of narrow streets, with some streets used as a gallery, as the photograph shows.
We're excited about seeing olive trees, globe artichokes growing and eating fantastic focaccia bread with onions and olives for a picnic on the beach and drinking thick hot chocolate in cafes. We're horrified by some of the prices: Soya milk is 2 Euro 60 cents in the supermakets, so is on ration and we have paid 6 euros for a beer in Pisa. Of course, olives are cheaper, so all is not lost.
Posted by CandA Kubicki at 20:07