If there's something strange in your neighbourhood 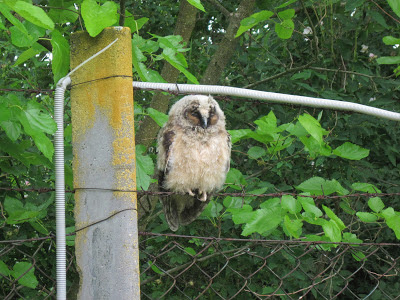 At about 22.00 on our first night in Hungary, we were sitting quietly inside the van reading when there was a thump on the bonnet, a scrabbling noise and then silence.  Slightly startled we got up but couldn’t spot the cause of the noise and reasoned that we were on a camp site abounding with wildlife.  We had seen cats, both Green and Great Spotted Woodpecker, a baby owl sat tight on the perimeter fence through the hours of daylight and the usual other birds.   In our eight years of motorhoming, this was the first time an animal had tried to jump on the van but there had to be a first time.

The next night we camped in Visegrad, the site had some trees, dark gloomy facilities and a five minute wait for hot water.  It was on the edge of the town surrounded by houses.  Creatures of habit, we were again sat quietly reading at around 22.00 and again there was the same thump and scrabbling on the bonnet of the van.  The next morning there were footprints; cat or squirrel we couldn’t tell.  Anthony suggested we had a stowaway.

Our third night in Hungary was at a newly refurbished camp site in the Matra hills.  The facilities were modern and clean and the pitches were newly laid out.  The site had some trees around the pitches but we hadn’t seen any cats or squirrels, only birds and yet we once again had a nocturnal visitor leaping on the front of the van.

The next day, Anthony got te torch out and searched in all the corners under the bonnet, to satisfy himself that no one was hitching a ride across Hungary and we’ve heard nothing since.
Posted by CandA Kubicki at 09:29