When you’re with me baby the skies will be blue 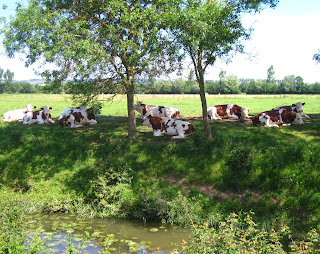 We celebrated our 28th wedding anniversary by having a day of easier cycling in the sunshine on country lanes around the town of Pont de Vaux, north of Macon.  By easier cycling, we mean cycling where you cycle, rather than spend most of the day walking the bike up 1:4 hills (see previous posts about cycling).

The town has a cycle map of 20 routes, for walking or cycling; all fairly short at between 6 and 15 kms and we thought it would be fairly easy to string a few together.  This is a rural area with crops and fields of cattle and a web of narrow lanes joining picturesque farmhouses and hamlets.  The combination of a poor map, confusing signposts and the vast number of the lanes meant that we were soon lost.  However, with so many routes, it didn’t really seem to matter and we would eventually get to where we wanted to be. 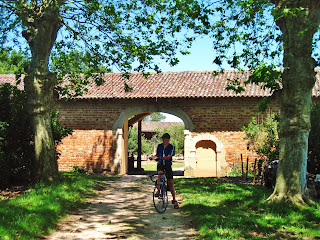 Along the banks of the river Soane, we followed the dyke; we still get a thrill from seeing working rivers in mainland Europe and the Soane had plenty of large freight barges, as well as smaller pleasure boats.  Navigation along the river was straightforward, compared to the winding lanes, but at every field boundary it was necessary to carry the bikes overhead to get through the narrow stiles.

This is a lovely area for a day or two of meandering cycling; there are a number of campsites around the town and Pont de Vaux itself has cafes, restaurants and a supermarket.  Having written about our awareness of our own mortality in the last post, we now find ourselves on a campsite that has the air of an outdoor old people’s home; it is populated with retired English and Dutch caravanners and looking around we feel we might live to one day be celebrating 50 and maybe even 60 years of marriage.
Posted by CandA Kubicki at 18:05