Fritter and waste the hours in an off-hand way 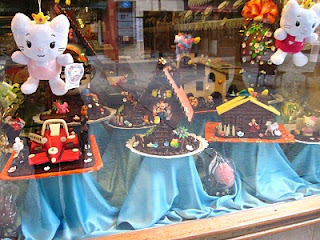 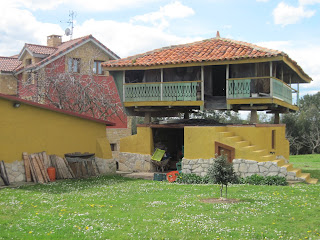 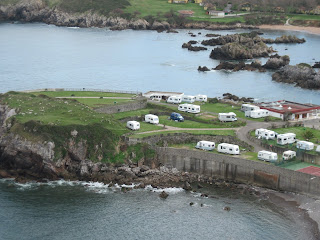 Our longest day travelling was also reduced to a 22 hours day; On Sunday we lost two hours, one due to the change to summertime and the other because we moved from back in to . We prefer not to use motorways and will often meander on minor roads for 100kms or so between campsites. However, due to a lack of open campsites we decided to travel the 400kms from Chaves in north-east to Candas, near in Asturia on the north Spanish coast in one day, along excellent, quiet motorways.

Somewhat disorientated about the time of day, we drove through a wild and empty ; big mountains with snow, kites flying overhead, huge plains of cereal fields and few signs of habitations. It was palm Sunday and at occasional small churches by the road we saw congregations with bunches of greenery in their hands.

We arrived in Candas, near , a prosperous part of , with a campsite pleasingly set on a rocky promontory. Inland from the coast are small farms and out walking we saw people tending their small-holdings in the sunshine and photographed many of the wooden granaries on stilts, characteristic of the area. Almost back at the campsite a motorhome stopped to offer us a lift; it was Theresa and Mike, our occasional travelling companions from . We spent the evening drinking Portuguese wine and liqueurs and reminiscing about our favourite places in .

We sail from on Easter Sunday and the chocolate goodies in the shops tell us the Easter weekend is getting closer. Our plans are to head east from Candas, along the coast, taking in the cave paintings at Cuevas del Castillo, near Puente Viesgo and some Rioja wine tasting before catching the boat in .