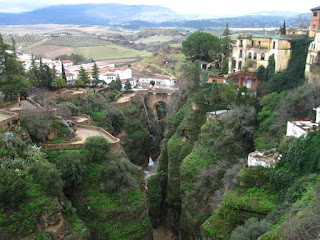 After getting the van window fixed in Marbella, we drove into the mountains to Ronda despite the poor weather forecast and were rewarded in two ways.

It was raining heavily when we arrived at the almost deserted campsite in Ronda and we were set for curling up in the van for the afternoon and evening when there was a knock on the window. Teresa and Mike from Australia invited us round to their (larger) van and many hours of wine, good company and shared food was our first reward for leaving the bright lights and mild weather of the coast; the conversation meandered through places we'd visited, immigration, music (from Jake Thackray to Green Day) and climate change.

The next morning we said farewell to Mike and Teresa; they are heading for Morocco for six weeks and then Portugal, where we're sure we'll meet up with them again and we headed into Ronda. Having seen the weather forecast we took all our waterproofs and were very pleased to enjoy occasional sunny spells and only light showers as we mooched around the pleasant town.

Three bridges cross the rocky El Tajo gorge; the newest of these is the highlight of the town and built at around 120m above the river, the view as you cross takes your breath away when you first look down. The gorge splits the town in two, but it has remained a manageable size to explore on foot; the old part of Ronda has pleasant streets, impressive city walls from the Moors occupation and well preserved Arab baths, the new town has some beautiful ornate buildings, shops, cafes and a hardy busker. In cool January weather there are few tourists about and at lunchtime we had to dodge the restaurant staff who hang around in the doorway and try to entice you into their establishment.