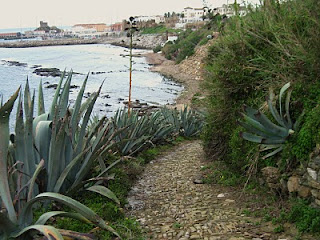 We were comfortable at the campsite in Tarifa and stayed there seven nights; an accolade only bestowed on four other campsites up to now on this trip; generally we like to be travelling, even if it is not very far and from Tarifa we only travelled 60 kms north to Cabo Trafalgar, to see where all the action happened in 1805.

The campsite here is the 100th site we've stayed on during the past nine months. We like campsites and the opportunities they give to meet people and observe human behaviour and various posts have described some of our experiences. Recent delightful characters have included a man from the UK who was painting his van with vivid pink emulsion; an amateur naturalist with such a breadth of knowledge we would have had to stay months to hear even a part of it and a story teller from the Netherlands who had learned his craft in Findhorn.

One thing you will always see on any camp site; Crocs, this is the footwear of the camper; everyone wears them, from small children to the retired, Italians to Germans. We have seen pink crocs, decorated Crocs, Crocs with socks, Crocs with dressing gowns, camouflage Crocs and fake Crocs. We own subdued blue and green Crocs; they are very practical for camping, being lightweight, washable, waterproof, comfy and versatile; you can wear your Crocs to the beach, in the shower, even in the rain.

One of the huge advantages of Crocs is that when it is raining you can leave them outside the van, thus avoiding bringing wet and muddy shoes inside. However, this was not possible at the campsite in Tarifa, as Lola, the owners West Highland Terrier would spot an unguarded Croc at 50m and mischievously carry it off to another part of the site. It was not uncommon for campers to ask if you had seen one of their shoes and we were seen hopping out of the van to collect a displaced shoe on a number of occasions.