If it wasn't for the good souls that make life better 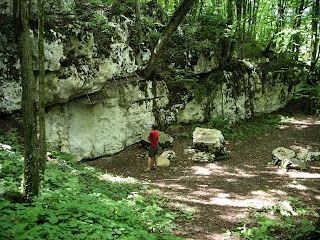 One of the lovely things about travelling is the unexpected kindness strangers’ show. We have met some friendly and helpful Slovenians, but none more so than the Slovenian neighbour at the campsite near Metlika, who came over for a chat and offered us a glass of his home made blueberry schnapps. It was ten in the morning, but it seemed rude to refuse and he assured us we were fine driving on a small glass. After chorusing Na zvravje! And drinking he then insisted on giving us the rest of the bottle as a gift. We were sorry we had nothing typically English to give him in return.

We were able to share the blueberry schnapps with Bert, a lovely cyclist from the who has been following us through from campsite to campsite. He is the first person who did not say ‘Manchester United!’ when we told him where we lived and instead exclaimed, ‘Factory records!’ A positive sign that we would get along.

We have now visited two shrines to Mithras; a religion popular with Roman soldiers and banned by the Emperor once he had become a Christian. The one near Crnomelj in the photograph was very atmospheric in a woodland setting, whereas the one at Ptuj had been enclosed in a modern building. However, the outdoor carvings are deteriorating quickly since excavation, with little to protect them.