Roll up for the mystery tour 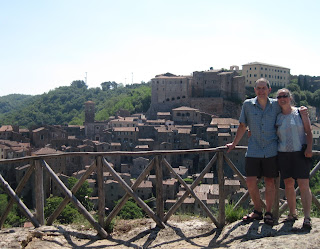 We met Karin during our year long trip in El Rocio in Spain and felt an instant rapport with her.  Karin is Italian and we had kept in touch and knew she had moved back to Italy, so once we had decided we were visiting Italy this year we planned to meet up.

Karin is currently renting a house near Sorano and we made our way there from San Gimignano.  Karin showed herself to be an excellent host and holiday guide and we felt very lucky to have the chance to see some magical places we would never have found on our own. 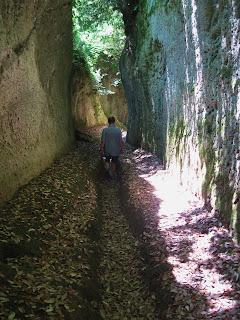 The Vie Cave, or excavated roads, are an impressive road network in the Sorano area, built to link Etruscan necropolis and settlements and later incorporated in to the Roman road system.  The roads are deep trench-like routes excavated from the local tufa rock and Karin took us along the Via Cave San Rocco, a steep shady section of Vie Cave that took us down to the river Lente. 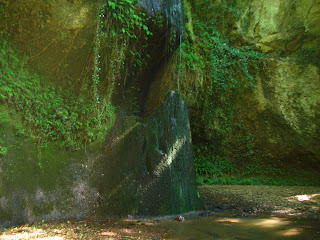 After Sunday lunch in a local restaurant busy with Italian families, we followed Karin to an unmarked layby and followed a path with no indication of where it led, along a river and through meadows of poppies and fields of cattle to a large secret hollow into which a three-tiered waterfall fell.   This enchanting grotto was peaceful and cool on a hot sunny afternoon and we all found pleasure in spending time there.

From the waterfall pool we took the steep path up to the cliffs, where an early Christian chapel, the Eremo di Poggio Conte, had been carved out of the tufa overlooking the waterfall; the effort that had gone in to this hidden gem was impressive, the chapel had leaves and columns carefully carved in to the ceiling, with patterns painted on the rock for decoration and an elegant carved doorway. 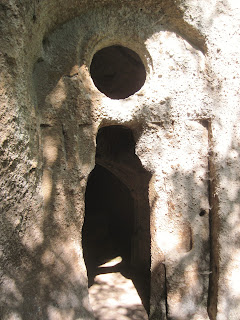 Thank you Karin.
Posted by CandA Kubicki at 18:01