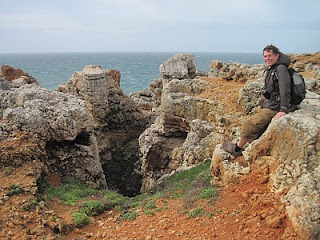 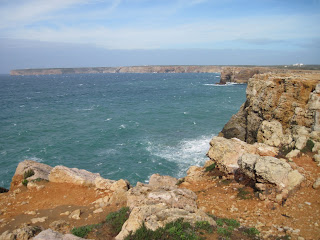 The Romans saw the sunset at Cabo de Sao Vicente and thought the sun was sliding hissing into the sea every evening; it is also within the Parque Natural do Sudoeste Atlentejano so we thought it was worth a visit, despite the forecast for strong winds.

We came upon a group of four empty cars parked haphazardly by the cliffs and no sign of the occupants; Anthony speculated it was the scene of a drugs-war shoot out as we’d watched ‘No Country for Old Men’ the evening before. Carol pointed out that drug dealers rarely travel around in an old Renault Four. When we reached the cars we spotted their occupants half-way down the cliffs; they had climbed down with ropes and were participating in extreme fishing.

We missed the bus back to the campsite and the prospect of two and a half hours to wait until the next in such an exposed spot saw us enquiring about taxis. A cheerful taxi driver in a camel coloured driving coat gave us a ride and gave a commentary about the weather, other drivers and the traffic lights in Portu-English while we nodded and watched the road for him.