I'll be gone when the morning comes 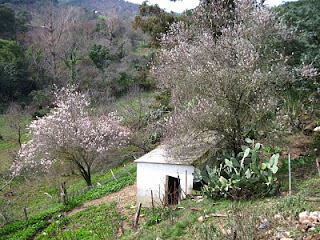 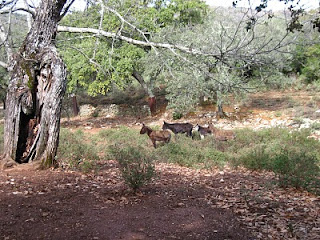 The area around Aracena is hilly and forested, rather than mountainous and is a landscape of woodland and small-holdings, called huerta, connected by a useful network of old paths lined with stone walls and sometimes cobbled. We walked through olive, cork oaks and chestnut groves, the occasional blossoming almond tree adding some colour; we spotted the local black pigs, sheep and goats grazing among the trees and plenty of horses and donkeys, overhead Black Kites and vultures hunted. A less rustic sight is the occasional large chicken farm, but there was always something interesting around the next corner.

If you look closely at the photograph of the donkeys, you may notice that two of them have the pattern of a flower in a pot seemingly shaved into their coats. We’ve no idea if this decoration was a childish game or an example of an old local custom. Do you know?

We didn’t have to leave the house to find wildlife in Aracena; a gecko clung onto one of the walls, a hedgehog snuffled around the garden at night and on our last evening a bat appeared in the living room, flew around and then settled on one of the high beams and could not be encouraged to leave; it was still there in the morning.