Let the winter sun shine on 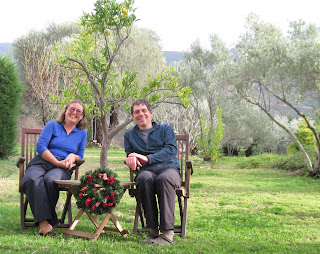 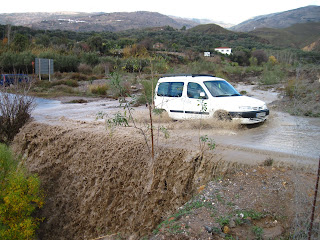 We have worn our waterproofs more times this week than we have during the last eight months; it has rained and thundered and rained some more. Fortunately, we are warm and snug in Sheila and Jack's house and have only ventured out for damp walks along the quiet lanes, among the orange and olive trees, for an hour or so every day.
On Christmas Eve we needed to buy some supplies and set off in the van. We got less than 1 km along the road into Orgiva and had to turn back, the normal trickle of a river was flowing fiercely over the road, bringing branches and rocks with it. We returned to the house to review our food options for the next couple of days; we have lentils and onions so won't starve but it will be a more frugal Christmas than some; although at least one thing we won't be short of around here are oranges.
Later in the afternoon, the sun came out and we walked back up the road, joining the locals taking photographs of the swollen river, as it seems this is an unusual sight. The photograph shows it was not as deep as the morning and cars were getting through; unfortunately by then it was too late to find a shop open in Spain. Sheila and Jack tell us they usually eat out of doors in the sunshine on Christmas Day. The sun certainly warms things up; we took a mug of tea outside and played with the self-timer on the camera. Merry Christmas!
Posted by CandA Kubicki at 16:50