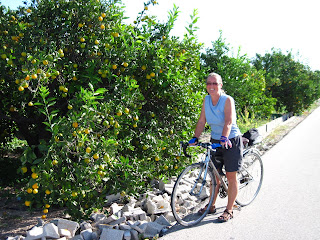 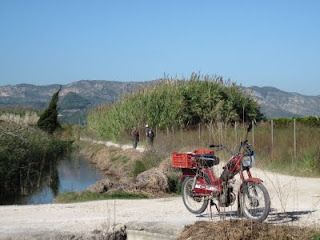 A couple of incidents have made us think about our current lifestyle and whether we have any gear we should have left behind.
A camper from the Netherlands came over to have a look around our van and enthuse about VWs generally and invited us over to his. His VW is from 1994 and is in beautiful condition and we admired all his facilities. In Gandia he is staying in a caravan with an awning and uses the VW for days out and he also invited us into this home he uses for seven months of the year; the amount of stuff he had was jaw dropping. He is a blues fan and had two electric guitars on stands, as well as posters hung inside the awning of blues greats. He has occasional tables, a TV, comfy chairs, shelves, plants in pots; there seemed to be more furniture than we have in the flat in Salford.
The camp site at Gandia is a fairly busy one, but while the eastern end of the camp site is cramped with caravans and motorhomes from Germany and the Netherlands, we have been camped quietly around the corner, with only a Spanish family for company over the weekend. This tranquility ended when a German couple decided to move next door. The first thing to appear at 8.30 was their shelf unit, then a plant in a pot, the satellite dish, a fibre optic lamp, chairs, tables, the stuff kept on appearing. We can only guess why they want to move, but it provided good entertainment.
We wondered, is there anything we haven't used over the last seven months? The answer is that apart from the emergency equipment we carry, we have a fan heater and two blankets we have still to make use of. The van has an excellent diesel heater and we only carry the fan heater and blankets because we had a very cold experience camping in February and -10C in the old van when the heater drained the battery. The big question really is, should we be carrying a pot plant?
The photograph with this blog is Anthony conversing with an amiable man we met while walking through the orange groves near Gandia. He seemed to be responsible for checking the well being of the irrigation ditches and he did this by driving around the lanes between the orchards on his motorbike. He told us lots about his work and the area, but as it was all in Spanish much of it went over our heads. We explained that we spoke little Spanish and kept apologising for not understanding, but he continued to talk in the hope that something was getting through.
Posted by CandA Kubicki at 09:04