Can we climb this mountain? I don't know 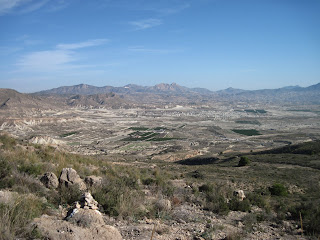 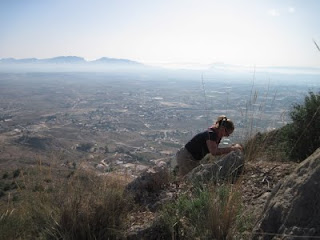 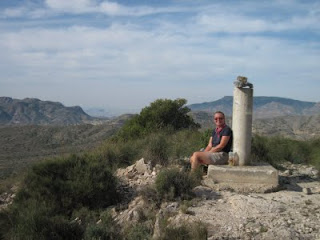 Behind the camp site at Los Banos is a hill that is 585 m high. Of course, it was there so we had to climb it. We have not managed to find maps useful for walking in Spain and so we set off with a black and white photocopy of a map and instructions in Spanish. This made route finding somewhat problematic, although occasionally we were assisted by yellow and white splashes of paint on a rock.
The route was described in Spanish as being of medium difficulty, so we expected something on a par with Helm Crag. While Anthony saunters up anything with his hands in his pockets, as soon as the angle gets vertiginous Carol resorts to scrambling with three points of contact. The rocks were particularly rugged and while the son of a goatherd emerged at the top relatively unscathed, Carol had blood dripping dramatically down one leg as she emerged from the top of the crag.
The view from the top was fantastic; this was more like the Spain of Don Quixote and Laurie Lee and we enjoyed the solitude and tranquility; no one else on the camp site is up to such a scramble (see earlier post). The semi-dessert landscape here is very different from anything we are familiar with in the Lake District fells. Descending once again tested the photocopied map and our navigational skills to their full extent; at least as we tramped through the vegetation we were enveloped in the aromatic smells of rosemary, thyme and lavender.
Posted by CandA Kubicki at 17:22