I took her to a supermarket, I don't know why 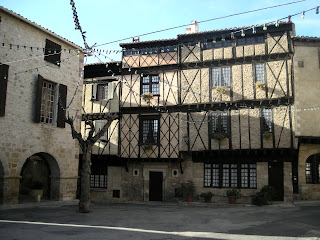 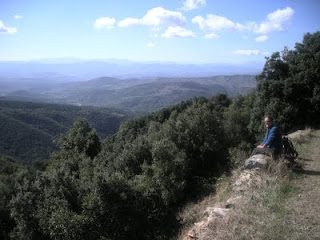 Alet les Bains is a small village about 30 kms south of with some impressive medieval buildings and a thermal spring with Roman connections. It has a camp site owned by a British family with sanitary facilities the Caravan Club would be proud of. The river Aude runs through the site and from our pitch we have seen an Otter and a Kingfisher. The walking is also good here; from a hamlet above the village we had fantastic views over to the , another afternoon walk took us through prickly undergrowth only rivalled by the last Scottish walk we were on with Stephen and Jenny before we came away.

We cycled along a track from Alet les Bains in to Limoux, a charming small town which seems to have retained more than just cafes, boutiques and estate agents in its town centre. Out of town shopping is everywhere in France; even the book shops and music shops are large warehouse buildings on the ring road and generally if you want to buy anything more substantial than an ice cream you need to find the nearest hypermarket.