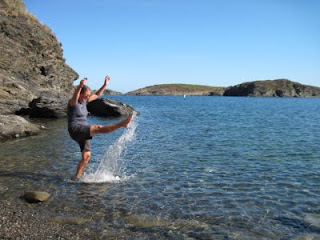 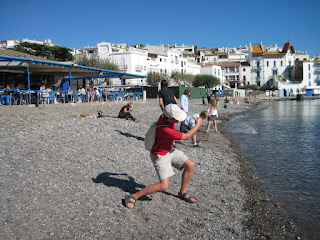 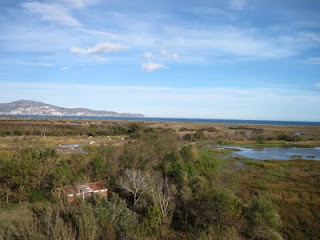 Near to Sant Pere Pescador is the Parc Natural dels Aiguamolis de L'Emporda; a wetland area that is a haven for wildlife. We spent a relaxed afternoon there and particularly enjoyed seeing the Cattle Egrets feeding around the horses grazing in the natural park: one Cattle Egret perched cheekily on the back of a horse, others got in the way of the horses as they tried to eat.
We were very impressed with the natural park; it is Ramsar site, which means it is internationally important as a wetland; the interpretation boards were well placed and provided information in five languages, if you count the latin; the footpaths were dry and well marked and there were plenty of hides from which to watch the birds.
We have found exploring this part of the Costa Brava very pleasant; spending a few hours at the Greek and Roman ruins at Empuries and a day pottering around the narrow streets and rocky bays of Cadaques. The beach at Cadaques is a stone skimmers paradise and Anthony rose to the challenge, achieving eight bounces. When Carol picked up a stone, everyone on the beach wisely took cover - they must have seen Stephen's video from Aysgarth Falls!
Posted by CandA Kubicki at 19:12